The Newman Government will mark the 30th anniversary of the sister-state relationship with Japan’s Saitama Prefecture with a state gift of koalas for the Saitama Children’s Zoo. Premier Campbell Newman, who is in Japan leading a trade delegation, said the gift was unique and extended the goodwill shared between the two regions. “Since the sister-state relationship started in 1984, there have been many exchanges in areas such as education and the economy; sharing our unique wi

Here’s an interesting piece on how a cartoon turned the raccoon into an invasive species on the island of Japan. If only the koala had this kind of support in the community! Tales of monsters invading Japan are a longstanding tradition, usually involving menacing kaiju—literally “strange creatures”—rising from the sea to wreak havoc on a Japanese city. At this very moment, the country is engaged in just such a war, with an entire army of invasive creatures, but they’re both l

Maya is now the only Koala Detection dog in the world after the tragic accident that claimed Oscar’s life. Maya can find evidence of Koala’s within minutes tracking scent and indicating on scat. For humans to do the same job will take approximately 500 times longer. Maya is available for Government and private agencies for koala detection and is proudly owned by Romane Cristescu. Check out the conservation dogs @ http://www.wildhelpers.com/conservation-dogs.html #community #c

http://www.mnk9.com With profound sorrow and grief it is my duty to inform you that The World’s first Koala Detection Dog, Oscar has been tragically killed On Saturday September 14, 2013. Oscar was working in Port Macquarie locating Koalas in front of the excavators and harvesting machines making a new housing development with ecologists on stand by for a run to the koala hospital. On Saturday afternoon Oscar and owner Jim Shields were at their accommodation when a local koal

Keepers are excited to announce that the UK’s first ever koala joey has been born at Edinburgh Zoo. An amazing testament to dedicated and skilled zoo keepers, first time mum two-year-old Alinga only arrived at the Zoo earlier this year, before being introduced to male Goonaroo in April. For all the latest news on Alinga and her Joey visit: website: www.edinburghzoo.org.uk or facebook. #koalazoo #news #video

A Statement From Rory O'Connor On The Koala Land Report

A statement from Rory O’Connor, Yugambeh Aboriginal community spokesperson Borobi – koala Kulun boomooie – the path ahead I am sure I speak for all Yugambeh people, and indeed all Aboriginal people, when I applaud the ambitions in this document. The borobi was protected by family totemic law for tens of thousands of years, and simultaneously enjoyed as a food source by others for all this time. Aboriginal lore meant the species was both nurtured and utilised in a sustainable

Any time there’s a federal election approaching, you’ll see and hear Australians saying things like, “I’d like to vote for [Minor Party/Independent] but the most important thing is to keep [Major Party A] out, so I’d better vote for [Major Party B].” But this concern doesn’t apply in Australia; we have a more elegant voting system than that. We seem to have picked up ideas about “wasting your vote” from American TV shows or something. So here’s a comic designed to clear up th 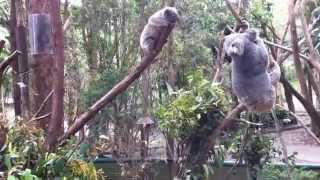 Great footage of a koala helping her joey bridge the gap between trees! #koalazoo #video