Three koalas arrived at Pairi Daiza on Saturday morning, the Zoo announced in a press release. Their arrival, which was initially planned on the 24th of March, was delayed due to the Brussels and Zaventem attacks. The three marsupials arrived at the Zoo at 7.40 am on Saturday morning. They came from Brisbane, after a journey of 16,000 km. The females, Carina, Coco and Zelda, “are doing really well, and settling into their new surroundings”. They will be kept in quarantine 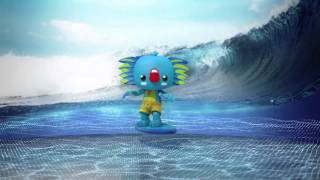 A loveable koala with fur the colour of the ocean and a passion for surfing and adventure was spectacularly revealed this morning as the mascot for the Gold Coast 2018 Commonwealth Games (TM) (GC2018). Borobi - the indigenous Yugambeh language word for koala - will play a key role in welcoming the athletes of the world and bringing to life the true spirit of the Games. It is the first time a koala has been chosen as the mascot of a major Australian multisport event. Ins

Mascot for the 2018 Gold Coast Commonwealth Games has been Revealed! It's a Koala!

GM of Life Sciences, Dreamworld Corroboree and the Commonwealth Games 2018 Indigenous Relationships Manager, Al Mucci, joined one of the amazing artists behind the incredible indigenous artwork seen throughout Dreamworld, Chern'ee Sutton as she announced her artwork will be featured on the hands and feet of the Gold Coast 2018 Commonwealth Games new mascot, Borobithe Koala! Original Story. #news #community